In addition to selling tens of thousands of supercharged cars with at least 707 horsepower, the introduction of the Hellcat Hemi architecture spawned a new era of engine swaps. At first, folks building project cars were buying up wrecked Hellcat Challengers and Chargers for the 707-horsepower Hemi. Upon seeing that, Mopar introduced the “Hellcrate” – a crate engine version of the 6.2-liter Hellcat engine topped by the 2.4-liter IHI supercharger. That proved to be hugely popular with an MSRP of $20,215, with scores of Hellcrate-powered modern and classic muscle cars being built in shops around the country. 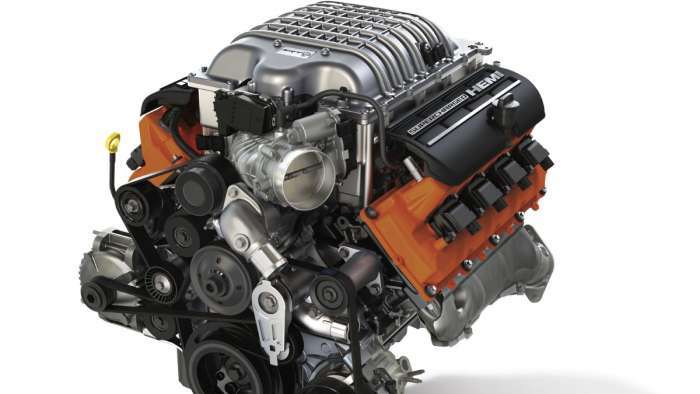 The next big crate engine from Mopar was the Hellephant. That mill displaces 7.0-liters and the supercharger measures 3.0-liters, yielding 1,000 horsepower and 950 lb-ft of torque. The problem with that engine was that it was offered in limited numbers and it cost $29,995. Those who couldn’t get a Hellephant and who weren’t happy with the output of the Hellcrate began buying the 2.7-liter supercharger from the Redeye models to get more power. The problem with that approach is that the Redeye engine has unique internals that are not found in the Hellcat or Hellcrate.

Today, Mopar solved that problem by introducing the Hellcat Redeye crate engine. Unlike its two predecessors, it doesn’t have a catchy name, but it does have over 800 horsepower and it is available for order right now.

“With the addition of this new supercharged HEMI, Mopar now offers five HEMI crate engines with a range of 375 to 1,000 horsepower,” said Mark Bosanac, Head of Mopar Service, Parts and Customer Care for FCA – North America. “All Mopar crate engines are quality-tested and factory-backed to deliver proven performance to our enthusiasts.”

This new Mopar crate engine (shown at the top of this article) is listed at part number 68303091AA and it has an MSRP of $21,807. As mentioned above, that is only $1,592 more than the Hellcrate while offering 100 more horsepower and 57 lb-ft of extra torque on 91-octane pump gas. This Hemi has all of the stronger internals of the Redeye and Demon production engines along with the 2.7-liter IHI supercharger, which is engineered to deliver 14.5 pounds of boost pressure right out of the crate. This package includes all of the key engine components, from the throttle body to the exhaust manifolds. There is also a Front End Accessory Drive Kit (P/N 77072492), which includes an alternator, power-steering pump, belts, pulleys, and the mounting hardware for $696.

“2021 marks the year that Dodge is distilled to a pure performance brand with 700+ horsepower models available across the entire Dodge lineup,” said Tim Kuniskis, Global Head of Alfa Romeo and Head of Passenger Cars – Dodge, SRT, Chrysler and FIAT, FCA – North America. “The new 807-horsepower Hellcrate Redeye crate engine gives any pre-1976 vehicle owner another opportunity to become a member of the Dodge Brotherhood of Muscle by tapping into the Dodge//SRT power that wasn't available then, but is now.”

If you are building a Mopar project car and you want the power of the Hellcat Redeye, this new crate engine is the best option on the market – and it is officially on sale right now.

Turn on comments in the store settings!